What is Functional Training?

In our interview series with Markus Bremen, owner of the move better studio and long-time training and health expert, we talked about Functional Training.

Today, many fitness studios offer functional training courses. Athletic coaches train their athletes functionally, and physiotherapists rehabilitate and build up muscles on this basis anyway. But what exactly is Functional Training – and what is it not, even if it looks like it? Markus tells us his definition.

Functional Training is not a type of training, but a fundamental concept

Human movement can be understood based on the functional approach. We typically lose this fundamental movement through our everyday life and in our work-specific environment.

“For me, Functional Training is an individual, resource-oriented training of natural forms of movement” is how Markus puts it. The first important aspect here is individual resources. This means that although we are all made up of the same muscles, joints and bones, we nevertheless have great differences. Thus, Functional Training first needs to take into account individual prerequisites: i.e. strength values, possible imbalances, mobility restrictions, pain points or acute injuries, etc.

In addition to the consideration of the respective personal prerequisite, the goal formulation stands at the beginning. Only when a goal can be worked towards can the training also serve a specific function. It should be purposeful. For a competitive athlete, the goals are usually different than for a novice athlete.

Typical goals for most non-competitive athletes are weight loss, the targeted development of one or more muscle areas, endurance gain, but also the (re)learning of movement patterns and injury prevention.

Criticism of the Functional Training offer in gyms

Sports scientist Markus takes a somewhat critical view of Functional Training course offerings in studios, which often tend to focus on one tool, such as a suspension trainer, but cannot address each individual. Of course, a group trainer cannot take into account the individual resources of the individual athlete to the same extent as a qualified personal trainer can.

The roots of all movements and exercises from functional training come from rehabilitation or physiotherapy.

What in recent years, more concretely for about 15 years, has rapidly entered the fitness world as a long-term trend, was therefore not reinvented, but rather re-marketed. On the one hand, new training equipment was developed, which, however, often already existed in a similar form in physiotherapy, and on the other hand, special training programs were developed, which were positioned under the label Functional Training. 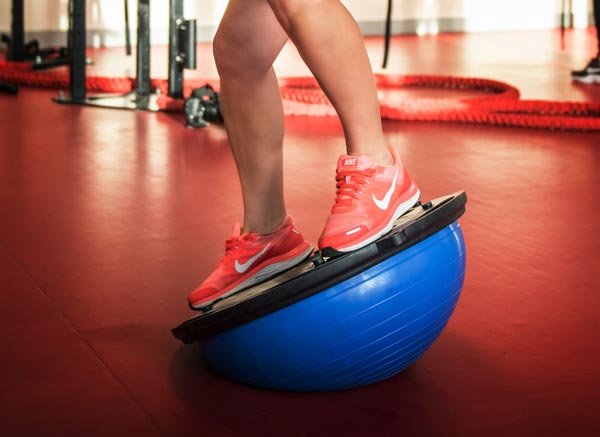 Even though an exercise on a classic machine can certainly be functional – depending on the goal – exercises from Functional Training are generally characterized by more freedom in the execution of movement.

This freedom in all our movement axes typically corresponds to our everyday life. For example, when we lift a water box into our trunk or jump over an obstacle while running.

However, a counter-example may be a functional exercise of a Formula 1 driver who sits tightly crammed in his race car and whose neck stability needs to be trained. So here, a seated exercise that only involves a slight movement in the cervical spine is functional, whereas the same exercise would not be appropriate for any non-racing driver. So, as you can see, functional is always invidual at the same time.

This is probably the biggest difference to training on machines as you know them from the gym. While these often train one muscle in isolation, Functional Training trains a movement pattern that involves multiple muscles.

In the next blog article “Exercise recommendations” we will give concrete examples of this.